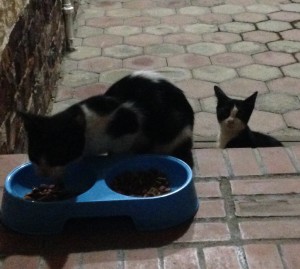 We’ve been back in Cairo for just over a week and Paris already seems a lifetime away. I think adjusting to the difference in food was the toughest for all of us.

Not that we’re not happy to be back. We are, very much, but I’m glad the trip—as wonderful as it was—is behind us. Now we can focus on life here. I keep thinking about how little time we have left, but I came across a photo of the day our boxes arrived from New York and realized that was only six months ago. It feels like ages. So there’s plenty we can do and experience in the 10 or so months we have left. I’m looking forward to it.

We’re in the midst of a typically Cairene experience, and one we’ve had before. We’re in deep with another stray kitten. He’s adorable, but would have been impossible to ignore anyway, circling my front yard with the loudest and most incessant meow I’ve ever heard. I got the vet to come examine him, because I was worried he was going blind in one eye (you’ve gotta love a vet who makes house calls). He said the kitten, a little ginger fellow who the boys call Rocky and the gardener calls mesh mesh (apricot) was about 5 weeks old and has a type of herpes virus in his eye that is common in street cats, and gave me a prescription for drops. The vet also said that the non-stop mewling was an SOS call, and that Rocky must have lost his mother. Poor little guy.

We set up a little home for him in our laundry shed. There’s a pipe that he can go through to get in and out. So can the other two kittens I’ve been feeding, who are a few months older than Rocky. At first I was worried they were going to take his food from him, but they seem to have taken him under their wing. And not only for the good. The first couple of days Rocky stayed close to the house, but then we found him wandering down the street with one of the bigger kittens. They’re already taking our sweet little guy out on the town and teaching him the ways of the world. They grow up so fast these days.

Trouble is, now it’s been two days and he hasn’t come back. O swears he saw him at the house across the street, where they put out tons of food each day, and the bawab tells me the same thing. I hope they’re right. I just want to give him his eye medicine.

Things in Egypt continue as usual. Life continues to feel pretty normal, but there are tensions bubbling below the surface that seem destined to flare up at some point. There was a bombing downtown, and 12 people were injured. The bomb went off at midnight, so I suppose it could have been much worse.

The government continues to keep the Al Jazeera journalists and many activists in jail, and some of them are on a continued hunger strike. One young man, who has dual Egyptian-American citizenship, is seriously ill and it seems as though he could die soon. The government doesn’t seem inclined to do anything about it. So the military regime is back in full force.

On the other hand, Egypt does feel considerably more stable, although with the current levels of repression you have to wonder how long that can last. In any case, foreign companies are showing renewed interest in expanding here. There’s a delegation of US businesses set to come next month to explore opportunities for investment, and the word is that tourism is picking up. Egyptians, for the most part, are just happy to have a return to normalcy.

It’ll be interesting to see what happens in the as-yet-unscheduled parliamentary elections. I saw a news story today predicting that the new parliament will be dominated by military types; I see no reason to assume that won’t be the case.  There is still no party nearly as powerful and as organized as the Brotherhood was, so with them out of the picture Egypt is looking at a political vacuum.

After nearly two days with no Rocky sighting, I think I saw him across the street last night practicing climbing trees, although it was dark so I couldn’t be sure. The kitten I saw was with what appeared to be its mother, and when I approached him the mother growled at me. I tried to get a look at his eye. It seemed to be okay but I couldn’t really tell. Some locals had staged a TNR (trap, neuter, release) campaign recently, so it’s possible the mother got caught up in that and just found her way home.