Paris. The City of Carbs. 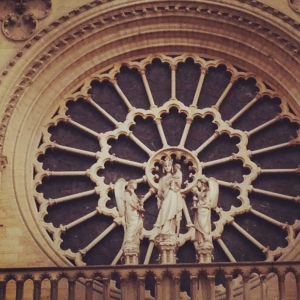 We’re wrapping up our week in Paris. Tomorrow we get back on the train to Brussels, and from there we’ll catch a flight to Cairo.

We’ve had a great time here, although it was far from the usual tourist’s week in Paris. We didn’t do much by way of seeing the sights, although the boys did go down to the Jardins du Luxembourg and played some chess, which they thoroughly enjoyed. A nice man there let them use his chess pieces and gave them some tips. 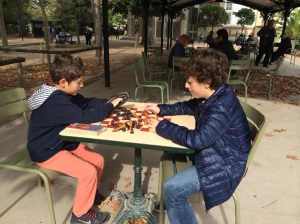 Instead, we were pretty focused on doing what needed to be done for the boys’ school application. I had a couple of meetings with friends of friends who have kids in the school. They all love it, and all warned me that it’s very difficult to get in to. The boys were nervous about their interview, but they did well. And they both loved the school. It looks like a warm and wonderful place. We’ll be keeping our fingers crossed.

But none of this is to say that our week wasn’t full of pleasure. We rented an apartment on the Canal Saint Martin and had a terrific time exploring the neighborhood. On our first day here we went for a run up the canal, and it was really enjoyable. The boys are hoping we wind up living in this neighborhood—the opportunity to bike and run along the canal was enticing to both of them.

Even more of a draw, though, were two award-winning bakeries within walking distance of the flat we were staying in, Du Pain et Des Idees and Liberte. We’d go out every morning and get a baguette and a selection of croissants and pastries from one of them, and then debate which was better. I think I ate more carbs this week than I have in the past three years combined, but goodness, were they delicious. We bought a baguette from an ordinary bakery on the way home one evening and the difference was remarkable.

Our last night here we went to eat at L’Entrecote, a restaurant that serves only steak frites and has a delicious, secret sauce. We weren’t going to go because the french fries are cooked in peanut oil, and X is allergic to peanuts, but I had called the sister restaurant in New York before we left Cairo, and they told me they use refined peanut oil, which means the allergens have been neutralized. I wasn’t going to take them, but after an unsatisfying steak frites dinner the night before, X decided he couldn’t leave Paris without a crispy tray of fries, so he was willing to take the risk. Plus, at L’entrecote they give you refills, which was more than he could resist.

We got there and the line was down the block, so I asked one of the servers if they’d give me just a couple of fries so X could try them and see if he’d be okay. She did, and he was, and the boys ended up having their favorite meal of the week. It was the perfect end to a successful trip. It’s safe to say that both boys are now big Paris fans. They keep telling me that they hope they get into the school. So do I. We should hear in late January, and I’m sure we’ll all have our finger crossed until then.

But now we’re heading back to Egypt. We’re on the train to Brussels right now, and from there we’ll board our flight to Cairo. It’s a little disorienting shifting between such different worlds. I’m looking forward to going back and getting my mind off of Paris for a while. I want to make the most of the time we have left in Egypt.