Spring has arrived in Cairo and the weather has been glorious. Warm, but not too hot; I wish it could stay like this indefinitely. Of course, I’m ignoring the khamaseen, the sand-filled southern winds that for two weeks left me constantly rinsing grit out of my irritated, itchy eyes, but they seem to be behind us now. We’re headed to the Red Sea soon for some sun and sailing lessons, and I can’t wait.

We had parent-teacher conferences at school. Once again, I’m disappointed in the lower school but completely wowed by the middle school. T has grown and blossomed here more than I ever could have imagined and that’s primarily due to the school. The administration and the teachers are fantastic. Some of his favorites are leaving next year, including the principal, who is the best school administrator I’ve seen anywhere, but I think it’ll be okay. The vice-principal is taking the helm and he’s terrific, too. It’s X in the lower school I’m concerned about. We’ve started making him do Khan Academy work at home because he just isn’t getting the academic challenge he needs.

Also in the positive column, the blackouts have been decreasing. They were nightly for a while, and occasionally we even had two in a day, but we’re down to one or two a week. It’s a nice relief.

Our shipment from New York has supposedly arrived in Egypt. It’s expected to clear customs in the next few days. I’m hoping we’ll get it before we leave for the beach, but that might be wishful thinking. I’m not sure where we’ll put everything since we’re still woefully short of furniture, but I sure am looking forward to having a dining room table, and the boys are excited about having all their stuff again.

While I may be feeling upbeat about life in Cairo, it’s been an abysmal week when it comes to women’s rights and societal attitudes about women. First, a student at Cairo University was sexually harassed by a group of fellow students who whistled and shouted at her as she walked through campus, some of them trying to remove her clothes. Afterward, the dean of the law school, where she studies, essentially blamed the incident on her for what she was wearing—a figure hugging, long-sleeved pink sweater and black pants. Then a British woman was raped by a security guard in a hotel in Sharm el Sheikh and the local governor basically said she was asking for it because she’d been drinking.

It’s probably not a huge surprise to hear that men’s attitudes about women here verge on the Neanderthal. Perhaps more surprising is how much women contribute to those attitudes. They, too, often see the victims of sexual harassment as somehow culpable—even the members of a Facebook group for expat women in Cairo were questioning the actions of the Sharm rape victim—even when they themselves are the victim. Until attitudes in Egyptian society change, and on a large scale, harassment and sexual assault will not stop. Women here need to be part of that change.

There was big news on the political front: Egypt’s defense minister, General  Abdul Fattah al-Sisi finally declared his candidacy for president this week, after first resigning his cabinet position. He is now officially a civilian, although he announced his intention to run while still wearing his army uniform.  Now that he’s formally declared, he’s fair game. We’ll see how long the near-universal adulation of him lasts. The Egyptian papers have already started publishing articles critical of him.

Sisi’s widespread support comes from the belief that he will be able make Egypt more secure. We’ll see. In the short term, his candidacy is just as likely to invigorate already angry Muslim Brotherhood supporters and Islamists and spark a new round of instability. Five people were killed on the Friday after his announcement in skirmishes with security forces, including a young female journalist. It’s all quite sad.

It’s easy to understand why Egyptians are looking for a little respite from all the turmoil. Even in our protected little bubble we’ve seen a recent spike in crime. Earlier this month a woman walking down the street with her two children just after nightfall was held up at gunpoint and, just two days later, three teenaged boys were abducted by five men in a car and robbed. They were unhurt and let go on the outskirts of the city with enough cab money to get home, but both incidents occurred relatively early in the evening and on the well-secured streets surrounding the school, so they’re a reminder that we should always be careful.

Egypt continues to be in a holding pattern while it waits for General Sisi, the Minister of Defense who is widely viewed as the solution to all that ails Egypt, to announce that he will run for president. There are few who doubt that he will, and he has reportedly put a campaign team together behind the scenes, but for some unknown reason he has yet to formally throw his hat into the ring. Egyptians are getting antsy.

In the meantime, the government is trying to create the appearance of activity by making various moves of its own. It reconstituted the Supreme Council of the Armed Forces to make the Minister of Defense—yes, said Sisi—its head, instead of the president. The government said the move was to bring the SCAF in line with the new constitution, but commentators in the media said that is not, in fact, the case.

This isn’t the only instance of disconnect between the government’s interpretation of the constitution and the transitional roadmap and that of the media and punditry; the government also reads the timeline for elections in an entirely different manner than most of the rest of the country. Which leaves Egyptians knowing nothing, really. At the end of the day, the only analysis that matters is that of the Presidency, since the President is the one calling the shots on all of this. We’re all still waiting to hear exactly what he thinks. 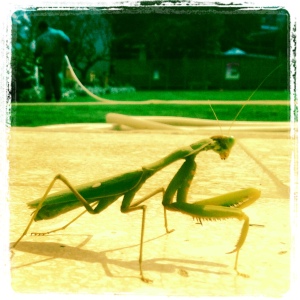 As if throwing innocent journalists in jail (#FreeAJStaff) doesn’t make Egypt look weak enough, things got downright silly last week with the AIDS Kofta scandal. For those of you who missed it, an army general claimed to have invented a wand that could detect AIDS and Hepatitis C from a significant distance, as well as inventing a 100 percent effective cure that involves drawing blood from the patient, breaking down the disease and returning it in a purified form.

“I will take the AIDS from the patient and I will nourish the patient on the AIDS treatment,” the army general said. “I will give it to him like a skewer of kofta to nourish him.” Kofta is a kebab made of ground meat.

What was most amazing was not that a senior official went on television and made such a ludicrous claim, but that a huge portion of the country believed him and attacked anyone who dared question the veracity of what he was saying. The President’s own scientific advisor was subject to a raft of insults when he suggested the general’s assertions were not true.

We continue to furnish the house at a snail’s pace, but took what was for us a giant leap forward by acquiring a bed for the spare bedroom in preparation for our second houseguest, my friend @cacurtis. We spent a long and excruciating day at Egypt’s first Ikea and, in the end, had to leave before we’d bought half of what we needed so we’d be home before X was due to be dropped off from a playdate and our new mattress was to be delivered. Still, we managed to get a bed, some bedding, and a dish rack. Only took us about three hours. Eventually we’ll have to go back, but I’m dreading it. That place is like the Bermuda Triangle. Once you go in you never know if and when you’ll finally get out. 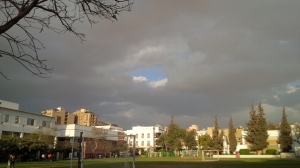 Hole in the Sky

We keep trying to join the gym, but it is as complicated as anything here. They don’t take credit cards or checks. We have to pay all in one installment. The ATMs never have enough cash for me to pull out the whole amount and I haven’t been able to remember to go to the cash machine two days running to get the money together.

Actually, it’s even more complicated than that. Most of our money here is in a dollar account and I have to email or go to the bank in person to have it transferred into the Egyptian Pound account. You can’t say hello to a teller at the bank without waiting at least half an hour, so I try to make my trips over there few and far between. It always turns out, though, that when I want to pull money out of the bank, I haven’t transferred enough over to the Egyptian Pound account, and it won’t convert automatically, even if there’s enough money to cover the transaction in my USD account. And on the weekends, when I usually think of this stuff, there’s no one to email because round-the-clock banking has yet to arrive in Egypt.

Finally this week I budgeted enough time to swing by the bank on my way to the gym—which is in the community center I’ve written about in the past—and, of course, their systems were down.  I ended up paying the extortionate day fee just to run on the treadmill. And then we all got sick and the gym lost its appeal. I still can’t breathe through the congestion. And I’m still not a member of the gym.

Tomorrow is @cacurtis’ last full day with us. We’re planning on renting a felucca in the morning and, in the evening watching the sunset over the Nile in a downtown bar and having dinner at Sequoia, an open-air, river-front restaurant in Zamalek. Maddening though it may be, Cairo is a stunning city.