When I was in New York in January, a friend told me that what she most wanted to read about on the blog was what my daily routine is like. So here goes:

There’s a lot about life here that’s very similar to my life in New York. I wake up and get the kids up and ready for school. When Oliver is around, he might do it. Breakfast is the same thing it was in New York: toast, or Weetabix or French Toast or eggs. One of the first things I did was get an espresso machine because there’s a dearth of good coffee here, so that’s part of my morning routine as well. Every time I go to New York I bring back bags of La Colombe, so I’m still drinking the same delicious stuff. I will be miserable when that eventually runs out.

The school is nearby and T’s classes start a little earlier than X’s, so he’ll often walk ahead. There’s only one street to cross between our house and the school, and on the way we pass at least four uniformed and undercover police officers and two school crossing/security guards, all of whom know us by name, so I don’t worry that he’s not safe.

One of us takes X five or 10 minutes later. There’s a massive security wall around the school and only people with passes can get through the rotating gate. Drop-off is pretty pleasant; they’re often blasting music in the morning, so people kind of dance to class, and the principals and sometimes the superintendent are outside greeting the students as they arrive. It’s all quite sweet.

After that my routine is pretty much the same as it was in New York. I sit down to write, and try to find time to read the papers and exercise. Both are tough. There’s a ton of Egyptian press, which I read in translation, and I try to keep up with the American papers as well.

On the exercise front, the CSA, the community center for expats, has a gym with treadmills and group classes. Occasionally I’ll go over there for a run, though I hate running inside. Sometimes I’ll go run at the boys’ school, but the track isn’t open to parents until after 5:30 p.m. so I’m usually too busy with them and their afterschool stuff by then.  There are also spin classes at the CSA, which I haven’t tried, and a Pilates studio, which I have and which is fantastic. There’s a yoga studio up the road that I haven’t been to but I know a lot of people who take classes there and like it. I’ll get there eventually.

The truth is, I’m still trying to pretend I can recreate my New York workout routine here, which I can’t. I miss running along the Hudson, so don’t run as much here. I haven’t found anything I like as much as the Core Fusion classes I used to take at Exhale, so I do one of their videos several times a week. And I tend to do my yoga at home as well. Eventually, though, I’m going to stop clinging to my old habits and develop a new routine. I had started swimming at the school once or twice a week when the weather was still warm, but it’s a little too chilly for that now.

I’m alone in the house until 1, when my housekeeper arrives. That’s another difference: she comes every day, whereas in New York we only had someone come once a week. Most expats in our neighborhood have daily help. For starters, it’s far more affordable here than it was in the U.S., but it’s also more necessary. Cairo is incredibly dusty and things get dirty very, very quickly. Streets are hosed down several times a day to keep the dust under control (making them muddy instead) and I’ve noticed our neighbors have their cars washed daily or close to it. And, as crazy as it sounds, it’s really helpful to have someone else who can answer the door. Everything here is done in person, so the doorbell rings constantly throughout the day.

I go back to pick up the boys from school at 3 or 4 depending on the day, and then deal with their various after-school activities, just like back in the U.S. We either cook something for dinner or order from one of the local restaurants (there’s an Italian restaurant, a Greek café and a rotisserie chicken place that are our regular haunts) or eat at the club where the boys play tennis. That part of life here is pretty boring and we’ve all discovered that we don’t particularly like Egyptian food. 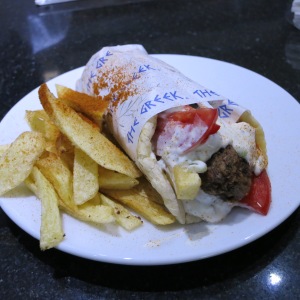 Similarities aside, there are plenty of things here that have become normal for me that I think would look strange to any of my Western friends. For starters, there’s the scene outside our house. There are always people in the street—the same people. There are the bawabs, the superintendent/doormen who live in every apartment building. There are the private security guards stationed at various points along the street, and the police men who constantly patrol. And then there are the drivers who spend most of their days just waiting around until they are needed.

We live on a small street that’s pretty quiet, but even here we get a lot going on that would seem out of place in New York. Like the bikya guy: several times a day a guy pulling a big wooden cart behind him walks through the neighborhood yelling “bikya, bikya.” He buys household junk. Or the zabbaleen, the garbage guys. Sometimes they come by to collect the trash in an open-backed pickup truck; other times they come in a little donkey-pulled cart. You still see donkey carts mixed in with traffic on a regular basis here, even on the highways.

And then there’s the poverty, which I still haven’t gotten used to. Two days last week there was a man dressed in a white robe with a white scarf wrapped around his head calling out to God in a hoarse voice while he shuffled slowly down the street. It was haunting and heartbreaking. A police officer later told me he was “magnoon” or crazy. There don’t seem to be a lot of services for the mentally ill here. There’s a paraplegic man we see wheeling himself through a busy intersection in the neighborhood who looks like he may also suffer from a mental illness. I’m always terrified he’s going to get run over. I saw him the other day stopped in the middle of busy traffic trying to lift his lifeless legs to put his feet back on the foot rests. It’s heartbreaking.

And the animals. There are at least a dozen wild cats that live on our street, and probably more. And packs of dogs. They’re not always here, but they can be scary when they are. One of them went for X the other day. Lately I’ve seen a litter of puppies frolicking around. They’re adorable—as long as they’re little. We hear packs of the big ones barking all night long.

One of our neighborhood feline friends.

Life in Cairo is lived on an entirely different timetable. Things happen much, much later here. I called a local orthodontist at 9 p.m. the other night just to see if I had the right telephone number. To my shock, someone answered the phone and gave me an appointment.  Another orthodontist (we’re still choosing…) called me at 10:40 on a Thursday night (the first night of the weekend; Friday and Saturday are the non-working days here), to give me an appointment for 7 p.m. that Saturday. I asked for the address and she told me to call at noon the day of my appointment and they would give it to me then. I ended up getting sick and when I called to cancel, they didn’t even have my name in the book.

This post is getting long, so I’m going to wrap up. I’ll try to be better about including all the quirky differences about life here in future posts. And feel free to ask questions—I’ll happily answer them.