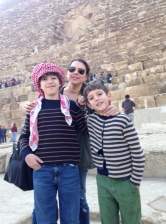 Momentous Moment: We finally made it to the pyramids this week, and we lived to tell the tale. X, who had been the most nervous of all, got off to a shaky start when, as we were climbing up the ramp inside the Great Pyramid, he started worrying that it might collapse on us, but once we were in the burial chamber on the top he was fine. When it was all done he decided he loved the experience, and he was the only one of us who was up for a camel ride. Now I can tick one of the many must-sees off my list. Phew!

The boys had a great last few days of school. Big parties and lots of fun, and Santa rode in on a camel. What more could a Cairo kid want? Yesterday we went out and got our tree. We were running out of time. The boys didn’t really want one but I insisted. T watched “No Impact Man” in his global affairs class and is worried about our carbon footprint, so we wound up getting a live tree. It’s not a fir and can hardly hold ornaments, but it’s cute and hopefully we’ll be able to keep it alive. T is skeptical; understandably so, given my track record with plants and fish, and our gardener has managed to turn our back lawn into mud so he’s unlikely to be much help. 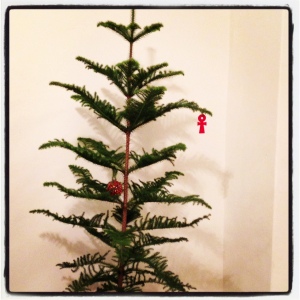 Speaking of my gardener…he sweetly delivered a little fenugreek plant to me the other day. It has the name “Joyce” taped on it. I’m expecting an angry visit from the first grader whose science project I stole any day now.

The past few days have been a crush of playdates and sitting in traffic and getting ready for Christmas. Speaking of which, I miraculously got a holiday card from my friend who just moved to London, in record time, no less. And they say the mail here doesn’t work. She was the one who had asked me all those questions, which I hadn’t finished answering (and by the way, I’m happy to answer any other questions), so here goes:

What’s it like at the market or supermarket and what do you generally cook for dinner?

Ugh. Food shopping here is no fun. T said the other day that he misses Whole Foods and I am right there with him. The meat in Egypt is enough to make anyone turn vegetarian. The local markets are fine—but just fine. They’re like New York bodegas.  There are a couple of bigger stores that are supposed to be nicer, but they’re too far for me to get to easily. One of them has an online shopping service and the meat and fish are pretty good quality, so I tend to get a weekly delivery from there and supplement with stuff from the local bodega-type shop. My housekeeper cooks for us once a week (more if I’m out) and we eat twice a week at the club where T takes his tennis lesson. In between I end up making a lot of pasta, salmon and chicken.

Do you think like an Egyptian or an American abroad and how much do you truly identify with your roots?

What I realize being here is how much I am the classic “third-culture kid.” I never really saw myself as an Egyptian-American in New York because all the Egyptian-Americans I met there were immigrants who spoke fluent Arabic, which I do not. Plus, my mother is Dutch, which complicates things even further. But I was at a party here a few weeks ago where almost everyone was like me. They were Egyptians, full or half, who had grown up abroad or partly abroad or in a lot of different countries. Many of the uber cosmopolitan Egyptians, even those who were raised up here but went to American schools, don’t speak much more Arabic than I do, or at least they aren’t fluent. I find I identify a bit with the Egyptians, a bit with the Dutch (I have become friendly with several of the Dutch mothers at the boys’ school) and a bit with the Americans, but not fully with any of them. I think my kids—and yours, London friend—will be in the same boat.

What do you miss and what are you happy being away from? Are you homesick? Could you stay longer than your projected stay of a few years?? So many questions!

I don’t know that I miss anything about New York, per se, in that I never have moments that I’m sad about the absence of things. I see pictures and I get nostalgic about the quality of the light, and when I order sushi here I remember how much better it was there. I miss Amazon and Whole Foods and good dry cleaners and other conveniences, but those are really little things for me, and not having them is also part of the challenge of life here, which is what makes it fun. Oh, I do miss running along the Hudson River. A lot.

I’m glad to have a break from the self-importance of New York, which you completely lose sight of when you’re there. I’m glad my kids are getting a different view of their place in the world. In New York they, particularly X, were aware of how much more money people around us had than we did; now they are keenly aware of how privileged we are from a global perspective. That lesson alone was worth the time spent here. T had learned that earning $7,000 a year puts a person in the global consumer class, and the boys were commenting on how much more than that everyone they know in New York earns. They know people here—people they see and interact with every day and whose homes they have been in (our gardener, our bawab, etc.)—who don’t earn that much. They see Western consumption and consumerism in a very different light now. Which isn’t to say they are immune to their lure—but they are more aware of it and how much they have in relation to other people in the world.

And there isn’t the same following of trends and fashions here, even among the super wealthy. It’s nice to be away from that.  There are a lot of other things that you don’t spend a lot of time thinking about when you live in the U.S. that look absolutely nuts when you’re here—at least to me—like the lack of gun control. Every time I pick up a newspaper it seems as though someone has walked into a hospital or a school and opened fire, and there’s hardly a response. The insanity of that is starker from here

I look forward to seeing my friends when we go back to New York and I wish they would ALL come visit, but I can’t say I’m homesick. I could easily stay longer here, aside from the restriction of T going to High School, which I don’t think I want him to do here. But I equally can’t see myself wanting to move back to New York in a year and a half. X was saying he thought we should move to India for two years (his best friend from NY is about to move there) and then to Italy for two years, and then somewhere else. If nothing else, the past year has taught me that life is full of tricks. I’m not trying to plan at this point. We’re here for another year and a half, and possibly a year beyond that. Where we wind up after that is anyone’s guess. It’s a big, big world.