The Aggravation of Appliances 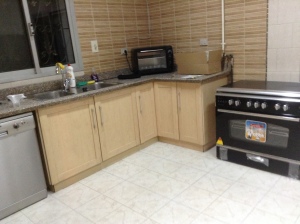 Ah, Cairo life. We’ve been back nearly a week and logistics continue to take up most of our time. Let me back up for a minute and say I’m loving it here. I love the challenge of penetrating a new culture. I love getting to know a new neighborhood. And making new friends. I am the happiest I’ve been in a long time.

But, gosh, nothing is easy here.

Somehow, none of it is bothering me—yet. Not the power outages, not the lack of furniture, not even the army of ants we’re sharing the villa with. None of it—except maybe the time our Internet went out shortly after we got it switched on—after four separate trips to the store and hours of hours on the phone with customer service (on Oliver’s part). The little adjusting-to-life-in-Cairo brochure they give you at the Community Services Association, a great resource for expat and the source of the closest drinkable cappuccino, warns that one should expect to only achieve a third of what sets out to do each day. Given our experience here, that seems ambitious.

Oliver has been great. The week the boys and I were gallivanting in Italy, he was trying to put the house together, all with a 7 p.m. curfew in place and a strict directive not to leave the neighborhood because it was potentially too dangerous further afield. Internet access was at the top of his list. I think he made two visits to the provider’s offices while we were gone, maybe three. When we came home he told me he’d been promised it would be switched on that day.

Fantastic. Only when I went to plug in the router I realized we didn’t have a modem. The next day, while I was out, Oliver got back on the phone with customer service. He spent two hours—maybe longer—on the phone with them. No one bothered to ask if he had a modem.

So the next day he went back to the store. Of course you need a modem, they told him. But they wouldn’t sell him one because he didn’t have a copy of his passport with him. So he went to three other stores. Curfew was nearing. No modem. He had to go back again to the Internet place the following day.

Finally we had Internet. But then the landline got knocked out. So we got back on the phone to customer service—I did, this time—and answered a litany of inane questions, such as, “What browser are you using?” and “Do you have the cord plugged in?” I did not have Oliver’s patience and, after irrelevant question #20 or so, asked for a supervisor. The supervisor told me that the problem was with Egypt Telecom, but not to worry, they would take care of it. An hour later we had no phone line and no working Internet. Welcome to Cairo.

I had read accounts of people being left in our situation for months on end, but Oliver got on the phone with customer service and in a few hours we were up and running. So, aside from the occasional lapse in service, we have Internet in the house, which means our Vonage works, which means our old 212 number works and is a local call from the US.

It’s not just getting wired that’s a challenge. The stove was delivered a few days ago but the delivery guys didn’t put the legs on or assemble the hobs. Oliver deciphered the Arabic numbers on what he thought was the receipt and had some very stern words for the guy on the other end telling him he had to send his crew back to finish the job. About 10 minutes later he got a confused call from the man we bought the boys’ mattresses from telling Oliver he didn’t understand what it was we wanted put together. Oops. So we asked the bawab (a doorman/super), who told Oliver that the delivery people don’t do that, the gas company does it when they come hook up the stove. Of course.

The dishwasher has been equally difficult to get working, but this appliance came with a dose of violence. The Zanussi guy didn’t come until a good week after he was supposed to. I couldn’t understand exactly what he was trying to tell me when he was here, so once again I turned to the bawab. There was some kerfuffle over a missing bag of dishwasher salt. I don’t fully understand what happened, but I heard the bawab telling him there would be no tip for him.

Zanussi guy left in a huff—supposedly finished with the job—and I went to pick up the boys from school. I heard some yelling when I got to the end of the street, and turned around in time to see Zanussi man jump the bawab. The two of them were in the middle of a full-on brawl when two local security guards jumped in and pulled them apart. High drama.

We checked in with the bawab when we got home. He was okay, apart from a torn shirt, but he had taken a sharp fist to the left eye. To top it all off? Zanussi guy didn’t even secure the hose, so water squirts all over whenever you run the dishwasher, and if you touch the metal door on the inside, you get little electric shocks.

And yet….the boys think their new school is the best ever and tell anyone who asks that they are enjoying Egypt, so it’s tough for me to get too ruffled about any of these little things when, so far, the transition has been such an easy one for all of us.

And oh….we have a new member of our household. Meet Samy.